Book Review: The Way of Kings by Brandon Sanderson 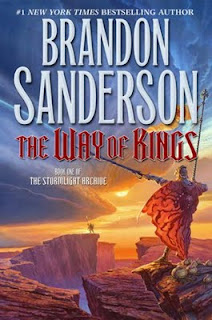 It’s been a long time since I’ve enjoyed a good epic fantasy. The operative word being “enjoyed.”

The Way of Kings by Brandon Sanderson may have been over 1,000 pages long, but it didn’t read like it. He’s one of my favorite authors – I’ve read Elantris 7 or 8 times by itself – and I’d been looking forward to this book for some time.

The main storyline revolves around the war sparked when the black-and-red-skinned Parshendi assassinated the Alethi King. Ten years after the war began, it has devolved into a competition between the Alethi princes for the gemstone hearts of the giant crustacean-like monsters who inhabit the battlefield. Only one of the princes, the Brightlord Dalinar Kholin, sees a problem with this, but his nightmarish visions of the end of the world have alienated him from his peers and made his judgment suspect.

The plot was incredible complex, mostly following the stories of several main characters: a former soldier turned slave, forced to labor under the infamous “bridge crews” who are essentially human shields to protect the real warriors from enemy arrows. A thief masquerading as a scholar to steal a priceless magical artifact and save her family. A paranoid young king who sees assassination plots in even his most trusted of advisors. An enslaved assassin with the ability to manipulate the forces of gravity who despises the murderous acts his masters force him to commit. A spren – largely unintelligent, fairy-like creatures attuned to very specific elements like pain, wind, or glory – who is becoming sentient as the human she is fixated with grows back his soul.

All the worldbuilding is detailed and very well done, but it does make for a somewhat slow start. So if you mean to dive into it, bring your patience.There was a good amount of repetition throughout the book; for example, I lost count of how many times Sanderson repeated that the Parshendi were not the same creatures as the enslaved parshmen, even though they looked exactly alike. I kept waiting for that to become relevant, but it didn’t – at least in this book. There isn’t much action for it being 1,000 pages long, and, as it is apparently the first novel in an anticipated 10-novel-long series, nothing is really wrapped up by the end. It’s a thousand pages long, but at the end you feel like nothing’s happened yet.

That being said, it was brilliantly written and engaging, I cared about all of the characters, and it read very quickly despite its length. I’m definitely going to read the next one even if it’s 2,000 pages. The world itself was staggering in scope but not so unfamiliar that it alienated the reader; humans are humans and dogs are dogs, although most other life forms seem to be giant crustaceans (which is actually kinda cool; the last time I encountered any kind of giant crustacean was in Stephen King’s The Drawing of the Three).  Each nation was well-crafted and explored, and each vastly different that the last.  One nation is plagued by 'Highstorms' so powerful that they whip building-sized boulders through the air likfe confetti and the plants themselves have learned how to move out of the way.  Another is filled with creatures who consider all forms of stone holy.

I could go on for a long, long time about this book.   But if you enjoy epic fantasy, you’ll enjoy this.  I really liked it, and I'll probably read it again just before the next book comes out.

Amazon page for The Way of Kings by Brandon Sanderson

Publisher’s Info for The Way of Kings:


For sale at my Etsy shop: