The Harry Potter movie franchise has come to a close, and now folks are scrambling to find the next big book series to turn into a mega movie franchise. But there are a few out there that I’ve been excited about for some time, and maybe the time is ripe for them to get crackin.’

The one I am most looking forward to is Peter Jackson’s interpretation of the Temeraire books by Naomi Novik. Can we say SQUEEEEEEEEEEEEEEEEEEEE!!!!!!!!!!!!!! I about fainted when I heard that Mr. Lord of the Rings himself was going to do the Temeraire books; one of my favoritest book series around right now. SO!! EXCITED!!   If you haven’t read them, do it.  Do it now.  They're historical fantasy novels set during the Napoleonic wars, only there’s dragons. Intelligent, fire-breathing, acid-spitting, shockwave producing dragons, employed by all governments and pitted against one another in glorious battle.  It’s gonna be sweeeeeeeeeeeeeeeeeeeeeeeeeet! 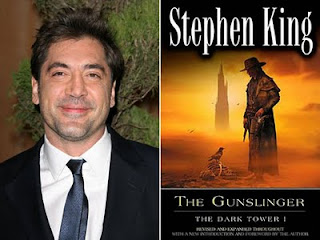 Another one I’m super-duper excited about is the Dark Tower series by Stephen King, scheduled to be transformed into a movie trilogy AND miniseries by Ron Howard. I’m so, so, SO glad they’re not trying to cram everything into a few paltry movies, because I don’t think it can be done properly. No, this will be a mammoth undertaking, and with the quality of television shows on the rise (like Dexter, True Blood, the Walking Dead, etc.), this is definitely the way to go. Javier Bardem is set to play Roland, the Gunslinger.

The Gunslinger (The Dark Tower, Book 1)

How about Pride and Prejudice and Zombies by Seth Grahame-Smith? That’s right. It’s everything you ever wished you loved about the classic novel, only there’s zombies, so you’ll actually want to read it. It’s being produced by and Natalie Portman (who will also star in it) and directed by Craig Gillespie. So watch out, 2013! Zombies coming atcha!


DRAGONRIDERS OF PERN!!!!
by Anne McCaffery!!!﻿ 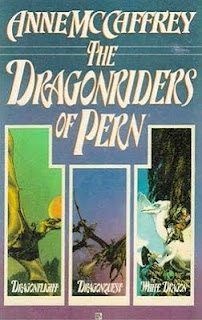 AAAHHH!!!  AAAAAAHHH!!!!  OMFG!!!  Tween girl screams of jubilation everywhere!!!  Anne McCaffrey is the reason why I love fantasy, why I love dragons.  Her Pern books were the first fantasy novels I ever read, and I re-read them all to this day.

There have been several attempts to make her Dragonriders of Pern books into movies or miniseries over the years, but they've always fallen through.  But now I have hope!  Copperheart Entertainment signed with David Hayter and Dark Hero Studios to adapt Dragonflight by Anne McCaffrey into a real-life, really-real-real movie!!!  Production begins next year!!  I may pass out from all the joy and joyness!!!!!


The Dragonriders of Pern

Ok, I've calmed down.  Barely.  How about you?   Which upcoming book-to-visual media projects are you most excited about?
Posted by Unknown at 1:08 PM