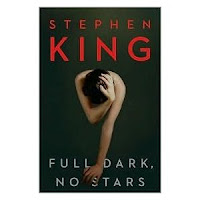 I finished this up a few weeks ago, but I’ve been so busy that I haven’t had time to write a review of it until now.

Full Dark, No Stars is Stephen King’s latest collection of novellas. And boy, is it dark. Not quite as much of the supernatural as I’d like, but then, I tend to prefer the fantasy & sci-fi stuff. Still, it was a really enjoyable book, just like Under the Dome and Duma Key before it, so I think it’s safe to say that Mr. King is out of his writing funk (thank you, dear Lord in Heaven!).

1922 is the story of a pre-depression farmer who talks his son into helping him kill his wife to prevent her from selling their farmland to a hog farm. The business is messier than anticipated, and the son has second thoughts almost immediately. Then things begin to go wrong. You’re never quite sure if the murderous duo are being haunted or have simply gone mad. The end was a little slow, and the story has definitely been told before, but it was dark and gruesome and chock full of rats.

Big Driver was straight horror, nothing supernatural about it, although it did inspire me to write my little rant a few weeks ago about how everyone should know how to change a tire. When Tess, a cozy mystery writer coming back from a speaking engagement, takes a shortcut through a small town, she finds a trap laid in the form of nail-riddled boards scattered all over the road. Unable to change her own dang tire, she waits helplessly until a seven-foot-tall psychopath comes along. He taunts her, rapes her, and leaves her for dead in a culvert alongside his other victims. But Tess survives, and she emerges from the ditch a different woman with revenge on her mind.

Fair Extension is a tale we’ve all heard before; Dave is dying of cancer and makes a deal with the devil for a little more time on Earth. But the price for this ‘fair extension’ is much different this time. Dave must trade his place with someone else, so he chooses to sacrifice his best friend, who’s always had better luck than Dave. The rest of the story chronicles Dave’s advancement and his friend’s slow spiral into hell on Earth. Perhaps the most disturbing thing about this tale is Dave’s satisfaction at the deal he struck.

A Good Marriage felt a lot like a certain television show I enjoy quite a bit. I won’t say which one, since that would be giving a little too much away. It’s the tale of an average housewife with an average marriage who suddenly finds something terrible about her husband of 27 years. This dark and horrifying secret haunts her as she considers what will happen to her and her family if this information were to get out, and in the end she makes a somewhat surprising decision.

As I said, this was a dark book. At the end Stephen King even quasi-apologizes for how bleak the tales are, and promises something a little brighter next time. I, however, really enjoy a good dark tale every once in awhile. If you like horror, if you’re in the mood for something a little dreary and twisted, by all means pick up Full Dark, No Stars. It’s nice to see him writing good stuff again after spitting out literary abominations like Lisey’s Story and Cell.