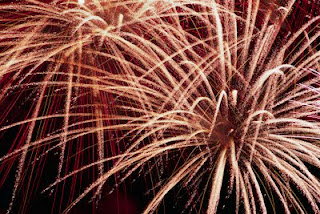 Here in Texas, fireworks-buying-season begins on June 24th.  So in two days, we're going to make the guy who owns the USA Fireworks trailer up in Aubrey extremely happy.  Best prices around.  Expect photos of the stockpile soon.  I'm so excited!  The 3rd of July is gonna be fun on a bun!  We are fortunate enough to live outside the city limits, and we're going to shoot SO MANY FIREWORKS off our front lawn! Ka-BOOM!!  There's no burn ban in Denton county, and we just had a nice wet rainstorm, so there's little threat of them interfering with my annual fit of pyromania.  He-he.

Oh, I can smell the black powder now...

We have to celebrate it on the 3rd of July this year because my poor husband has to work Monday night.  The neighbors won't mind; we had half the neighborhood out watching our 'splosions last year (even though my idiot brother-in-law almost set the neighbor kid's head on fire with a bottle rocket), and we didn't spend nearly as much on them as we will this time.  Artillery shells simply everywhere!!  Yaaaaaay!!

In other words, I shall be rather preoccupied over the next week and a half, so don't despair if I don't keep up with the ol' blog like I normally do.  I have food to buy, cupcakes to bake, lights to hang, and oh so many fireworks to buy. You don't even know.

Also, I have found a seriously kick-ass Beta.  Thus I am in the midst of a semi-serious rewrite of parts of Eyes of Stone, and I'm going to write the alternate ending, too.  Not gonna throw out the current one, a'course, but I want the new one on deck. The more I think about it, the more I want to use it.  Not so much because it's a better ending (I haven't written it yet, so how do I know?), but because I like where it's taking Book 2 in my head.

Anyway, my free time is spoken for this week and probably most of next week, so don't fret if I don't blog as often as I should.
Posted by Unknown at 12:51 AM