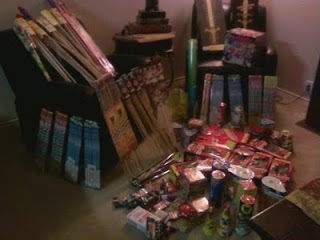 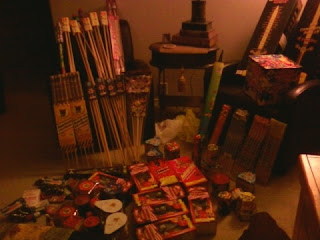 Once again, I apologize for the inconsistent and lackluster quality of my cell phone's camera.  But you can still probably tell that my living room looks like a fireworks stand.

We won't be spending much more on fireworks, since we had several other financial demands pop up over the last 2 weeks (family reunion, Six Flags, burned-out television light cartridge, several people coming in from out-of-town, etc.), but we'll probably spend another $20-$25 on little stuffs, like roman candles and bottle rockets, etc.

If anyone decorates for the 4th of July, I beseech you to check out Dollar Tree.  Ho. Ly. Crap!!  Awesome stuff for a dollar apiece.  I have so many American flags right now, bought in 3-packs for a buck a pack.  LED paper lanterns, bunting, glow sticks...it's gonna be a scene, man.

I got the burgers, hot dogs, and BBQ chicken on deck, chips and drinks, cupcakes...everything but shish-ka-bob, because I simply haven't got the energy to chop a 12-pound haunch of pork butt into bite-sized pieces this year.  Next year.  Probably.

Anyway, decorations go up Friday, cupcakes get baked on Saturday, and the only stuff I have left to buy is all the produce, like corn-on-the-cob and stuff for the veggie & fruit trays.