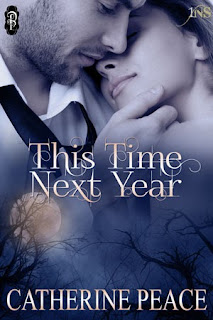 CONGRATULATIONS to my dear friend, Catherine Peace!!  Her debut novel, This Time Next Year, just went live on Amazon yesterday! HUZZAH!!  I'm SO EXCITED FOR HER!!!

Here's the blurb about This Time Next Year from Amazon:

Vampire Kiernan Shaw has never forgotten the night twenty years ago when he’d been forced to stand by while another vampire killed a six-year-old girl’s parents in front of her. He’s spent the better part of the last two decades watching over her, protecting her and hoping for an opportunity to make amends one day.

Ever since surviving the vampire attack that killed her parents, Moira Curran has dealt with the resulting nightmares and abandonment issues the only way she could—by throwing herself into her biochemistry career, preferring a life of a hermit in her lab to facing the reality of her lonely life.

Madame Eve brings them back together for one fateful night. An immediate bond of sizzling chemistry and respect forms, but can it heal her fears and his guilt?

YAAAAAAY! Everyone go buy it!  Buy it now! :D