COVER REVEAL for Catherine Peace's This Time Next Year

CONGRATS to LEXCADE, aka Catherine Peace, who is about to have her first book published! I'm so happy for/proud of you!! :D  I have the immense privilege to help her with her cover reveal, which is awesome.  Here it is! 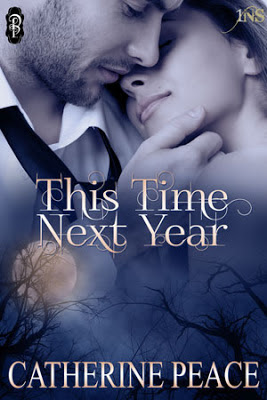 Ever since surviving the vampire attack that killed her parents, Moira Curran has dealt with the resulting nightmares and abandonment issues the only way she could—by throwing herself into her education and then her biochemistry career, preferring a life of hermitude in her lab.

Kiernan Shaw has never forgotten the night twenty years ago when his maker killed a six-year-old girl’s parents in front of her. He’s spent the better part of the last two decades searching for her in order to make amends.

Madame Eve has managed to bring the two together. When they finally meet, will Moira be able to give Kiernan what he needs? Will Kiernan put her fears to rest? Or will old fears and guilt keep them apart?

For a moment, he thought back to Madame Eve’s email. If she trusts you, she will tell you her name. He understood the power of names, and so did Madame Eve. Something insignificant to a mortal meant everything to a vampire, in whose world names were both salvation and control. Remind a vampire of his humanity, or steal it away by forcing him to do something horrific, like watching a little girl’s parents be eviscerated right in front of her.
“Kiernan Shaw.” Swallowing hard, he found his way back onto the coffee table. “And yours?”
Would she tell him her name? Would she allow him that kind of power?
She took a deep breath, as though considering the same questions. “Moira Curran.”
He rolled the name on his tongue and loved the way it felt. “Beautiful.” He reached to stroke her cheek, but she flinched. “Moira, I won't hurt you. I could never hurt you.”
“I'm sorry,” she muttered. “Old habits, I guess.”
He nodded, unable to speak at first. The cloying scent of her fear, like overripe peaches, almost strangled him. “Why did you ask me to stay?”
“I don't know.”
Neither did he, but he wouldn't leave until she asked him to.
“I don’t want to be alone, Kiernan. Isn’t that pathetic?”
He warmed at the sound of his name on her lips. His mouth watered at the thought of kissing her, exploring her, making his name come out of that gorgeous mouth again and again. He tamped down his desire. Nothing good would happen if he moved too fast. “Not in the slightest.” Willem had all but guaranteed him a life alone. Like he approached a scared animal, he moved next to her on the couch. She uncoiled, but didn't relax. “Talk, Moira. Please.” The silence hurt his ears as much as any scream.
She shook her head. “It's too hard.” Tears spilled but she didn't move to wipe them away.
Time to be bold, I guess. He brushed a hand against her cheek again. Instead of flinching, she eased into his touch. “I want to ease your hurt,” he said. “Will you let me?”