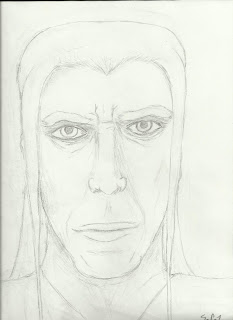 It might be a little hard to imagine, but his hair is stark white, even his eyebrows.  Eyes are silver.  He didn't turn out quite as 'pretty' as I'd envisioned, but I think I got the creepy factor down.  Maybe when I get a little more free time I'll tweak this one some more.

I have a couple of Tarcos I'm still working on, but I'm not happy with him yet.  Maybe I'll take a break from him and try to work on Anaiiya, or the gargoyles...though I shake my head and roll my eyes in frustration at the very thought.

Ah, well.  I guess I could work on my writing instead for awhile, now couldn't I?  I haven't even started on book 2, although I think I may start it out with a wedding.  Not sure yet.  I can't seem to get focused enough to plot it out in my head yet, hence the everlasting rewrites on Eyes of Stone and dabbling with some short stories.  I might post a satirical piece later on this week entitled "Motivational Speakers," which I was justifiably provoked into writing after being forced to sit through yet another seminar about productivity, time management, blah, blah, blah.  Or maybe I'll put up the first 5 pages of Eyes of Stone.  I haven't decided yet.
Posted by Unknown at 2:29 AM

Email ThisBlogThis!Share to TwitterShare to FacebookShare to Pinterest
Labels: Eyes of Stone, sketches