My apologies, everyone, for ignoring my blog (and all of you) so shockingly. You know how it goes; holidays, parties, work, watching reruns of Squidbillies and Dexter. Busy, busy, busy.

So here’s a quick recap of the last few weeks:

My mother-in-law bought us a shed! Huzzah! Then David and his brother put it together, which allowed us to move the lawnmower etc. out of the garage/bar/billiard room, so we could finally finish painting & hanging up bar/billiard room-related décor. Below is a picture of the shed, a glorious little resin bug/weatherproof number. Yes, I know the placement in the yard looks random, but it’s actually the flattest part of our backyard. When I’m feeling less lazy we’ll go buy some boards and cinder blocks and move it somewhere more appropriate. 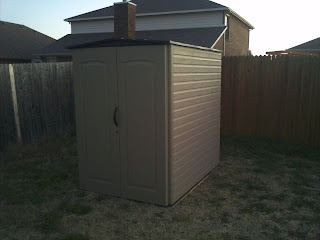 Also, I decorated both our guest bedroom & bathroom. Until now, they’ve been unadorned and uninhabited, filled with mismatched towels and excess furniture. But then I got 2 weeks off work and a free bed & desk, and I got to work. So I painted and raided several Wal-Marts’s and Hobby Lobbys's clearance sections, and ta-da! Here they are now, all blue and inviting and pretty!  They're not completely done yet (are they ever?), but that, of course, requires more money, which I do not have right now.  I especially like the rhomboid flash of light on the wall from that mirror on the bed, which I still haven't hung yet. 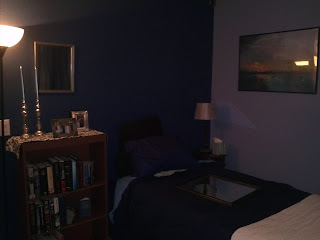 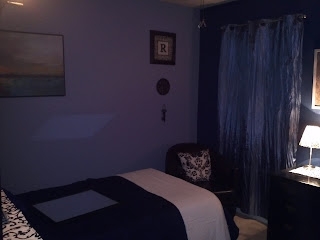 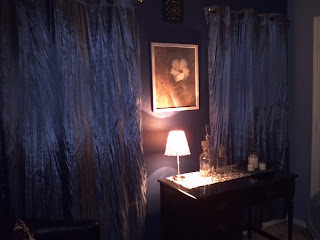 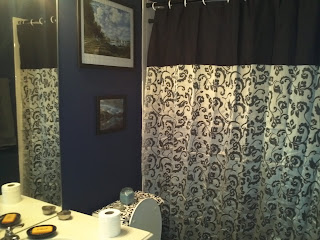 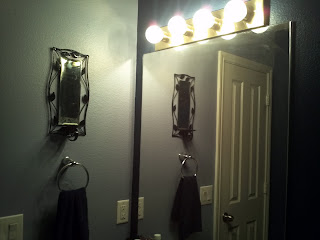 Also, my Mom got me a Kindle Fire for Christmas! SQUEEEEEEEE! I put the full Office app on there, so now I can work on my books whenever and wherever I like. Tis awesome. J My husband spend a few days networking it to our home computer, too, so I can watch movies/listen to music etc. on my pretty little Kindle Fire anytime I like.

I got a little more work done on Book 2. I don’t even hate it as much as I thought I did, which is nice. I’ve also discovered that there may be 4 books in the series rather than 3. Now I’m even more annoyed at Book 2, because I have SO MANY IDEAS for Book 3, but I can’t think about them too much until Book 2 is at least halfway done.

No word yet from the Angry Robots (sigh). I’ve decided that if they do pass, I’m going to do some tweaking and rework it into a YA book. I don’t think it’ll take too much tinkering, as most people who’ve read say it has something of a YA voice as it is. I just need to make it a little less sexy and make my MC a little younger.