Everything was according to the plan.

They woke up in the small room with equipment, as if it was a laboratory, the last thing they remembered - it was hard to breath and they lost consciousness. Six talented physicists: Heisenberg, Frish, Feynman, Rotblat, Oppenheimer, Shweber. They had a habit to call each other by surnames…
The night before they agreed to meet together. That was one the thousands of evening that they spend together, discussing subatomic particles to the theories of the beginning of the universe; that evening they came to a favorite pub to discuss coming conference. However the last night differed from usual ones.

That was a tough morning for everyone in the room, because physicists noticed loss of all their stuff, even including their shoes. Soon one of them, Feynman, found something strange on his body; it was covered with strange boils. The same was in the bodies of other men. 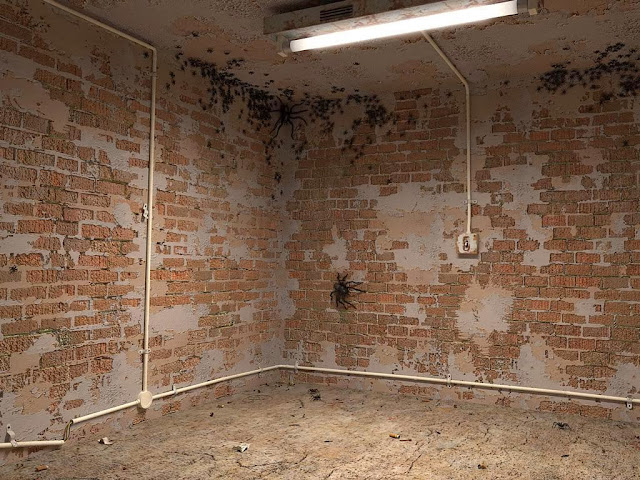 The first, who started the panic, was Shweber.  He asked questions that each of them was wondering, “What could possibly happen that night? Why can’t they get out of the room? What are they going to do, if they have no food or water left?” In several minutes they got a note with a hint “Guess what I want from you?”  Six men, six talented physicists were at a loss… Who was the author of the note? Where was he? And what did he want? The next hint came in the room itself… There were the most dangerous species of spiders – Brazilian wandering spires. That minute Shweber, Heisenberg, Frish, Feynman, Rotblat and Oppenheimer realized they were in actual, real danger. Spiders came out of under that doorway and saw their victims got strained and nervous more and more. That was luckless morning indeed… Rotblat suggested killing spiders before they kill all the six men. Words were not enough to express their fear and confusion. Rotblat and Oppenheimer tried to trap spiders, however, despite of all physicists were bitten.

Meanwhile the boils on the men’s bodies got worse and then they received another hint. Actually that was a voice message. It reported that physicists have to create unique nuclear weapon in time and in the circumstances they were. In case of refusal, all of they risk dying, those boils were the proof.  As for spiders, they were “reminders” of speeding up. If physicists cope with the task, they were promised to get the antidote for poison and, certainly, life as a prize. That was a very tough call, however there was no time to think. Actual danger was too close: spiders surrounded men, which tried to do at least something in that laboratory… Suddenly Frish and Feynman were bitten by huge spider and in a couple of minutes they fell and couldn’t get up from the floor. In addition, the walls of the room began to draw together. Heisenberg physicist lost consciousness, because of claustrophobia, he couldn’t handle the tension. Everything turned into nightmare … It seems there was no end to that.

In a couple of hours Heisenberg came to consciousness and looked around; there were dead bodies of his friends… They were covered with exploded boils, but surprisingly spiders were dead as well… The gas that steamed entire room killed the rest of people and spiders. Heisenberg got up and said , “Everything is according to the plan”. That was him, who planned everything… That was revenge for stolen fame he always wanted. He planned to see death of those, who, he considered as betrayers…
Everything was according to the plan.

About the author: Skilled and well-read writer Paul Smith is an essential part of http://coolcustomessay.com.  Paul comes to the particulars of different genres of literature, cinema, art and design. He never stops improving his writing skills and enlarges his scope as often as he can. If you are interested, you may easily with him and talk on http://plus.google.com/u/0/109013041940492187102?rel=author.
Posted by Unknown at 8:07 AM