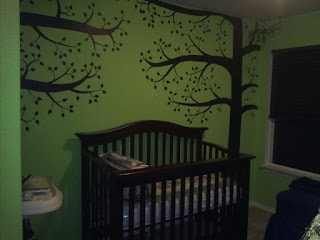 So here's Hunter's room! Took me weeks to get those darn trees finished, but...ta-daaaa!  There's still some little things to get done; new lampshades, buy a curtain, get new comforter set for the bed, some artwork for the walls that don't have trees, maybe a rug, but the hard part is over! Huzzah!  Now I can get to work on his baby blanket, which will be a green similar to the green on his walls, a Dallas-Cowboys blue, and a middle-shade or gray.

My baby shower is also on Sunday, which I'm getting excited about. Yay, presents, lol!! :D

We also bought a new (to us) car last weekend, so THAT'S out of the way. Our current car has been great, but it doesn't have an air conditioner, and you can't have a baby in a car sans A/C here in Texas.  Hopefully I'll be able to sell the old car for not too much less than we spent on the new one, and we can use that money to cover the bills while I'm off work after the baby's born.
Posted by Unknown at 1:51 PM